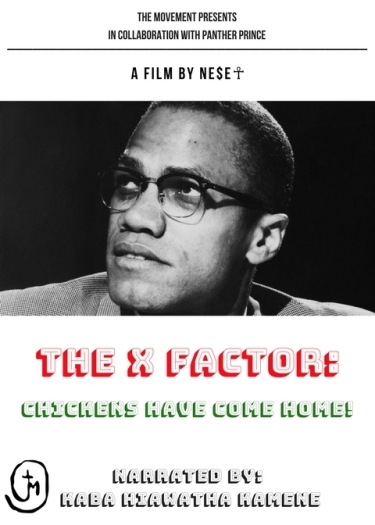 AKA: The X Factor: Chickens Have Come Home!
Genre: Historical Documentary
Year Released: 2018
Distributor: Movementism
Origin: USA
Running Time: 58 minutes
Rating/Recommended Audience: PG
Related Films/Series: N/A
For Fans Of: The Innerground Railroad, Project 2-3-1, Hidden Colors series, I Am Not Your Negro, Seneca Village, Malcolm X (Spike Lee Film)
Notes:
-The digital version of this documentary was used for this review. It was streamed via Gumroad.
Fun Facts:
-The X Factor was a father/son project. The father in question is Prof. Kaba “Panther Prince” Hiawatha Kamene who is the onscreen figure and narrator of this project. Prof. Kamene is an educator, author, and Panafricanist who was a student of Dr. John Henrik Clarke. His son is Heru “Neset” Kamene who directed, filmed, and scored this film. Outside of filmography, he has a music career.

-Prof. Kamene’s biggest exposure outside of these films with Neset (Innerground Railroad and Seneca Village to name a few) would be the Hidden Colors series created by Tariq Nasheed.

-Despite spending most of his time in multiple states, Malcolm X was actually born in Omaha, Nebraska before moving out of the Midwest.

-Malcolm X Day (his birthday on May 19th) got official holiday status in Illinois in 2015 while in Berkeley, California it has legal holiday status where government offices and schools are closed on that day.

-Louise Helen Norton Langdon Little was Malcolm X’s mom. She was originally from La Digue, Grenada and lived in Montreal, QC, Canada before moving to America. During her time in Canada and America, she was involved with the Universal Negro Improvement Association. This organization did activist work as well as instilling self-pride in the black community which did leave direct and indirect influences on Malcolm himself.

Some of my followers know that I’m no stranger to covering various films and documentaries about either the ADOS community or the entire diaspora in some way, shape, or form. I’ve reviewed such films which involved inventors (Make It Happen and the PBS George Washington Carver documentary), uncomfortable historical cases (Hate Crimes In the Heartland, Namibian Genocide & The Second Reich, or Cold Case Hammerskjöld), or some more localized works such as Project 2-3-1. Much like how I’ve reviewed two things involving George Washington Carver in the past, you can also throw Malcolm X on that particular list. In case some of you haven’t gone through my archived posts which I have in my Alphabetized Review List, I have reviewed the Raoul Peck documentary I Am Not Your Negro which has him alongside Medgar Evers and Martin Luther King, Jr. mentioned prominently from the perspectives of the late James Baldwin as well as Samuel L. Jackson (not kidding) narrating multiple segments. How does his influence affect certain people?

Okay, before I get to the review proper, I’m not going to dare make any jokes involving a crappy music reality game show competition that’s insanely popular in the UK given the title of this documentary. I feel like I have to do this every time I review a title that has obvious jokes that could be said. Moving on…

The X Factor is a documentary from noted New York City-based educator Prof. Kaba Hiawatha Kamene (birth name: Booker T. Coleman) as he talks about the influence and legacy of the man formally known as Malcolm Little. Prof. Kamene starts by talking about when he met him in person when he was only seven years old without realizing who he was at first before traveling around different boroughs of the Big Apple and Boston in front of significant landmarks associated with Malcolm X such as homes he lived in, restaurants he patronized, a mosque he helped establish, and his grave site in Ardsley (a Northern suburb of NYC). During these various travels, Prof. Kamene talks about the history of Malcolm X and how he could continue to be an influence.

I did have some familiarity with the Panther Prince professor himself due to some of his interviews with Phillipe “Shock” Matthews and a few of his lectures on YouTube. Prof. Kamene is a very intelligent person and I was impressed with him dropping so much knowledge in those videos. Seeing him in this documentary certainly added onto that reputation. I thought I learned more about Malcolm X through this documentary alone (saying nothing about the other books I’ve read over the past couple of years) than all of my years in school from kindergarten all the way to my days at a university. Seeing the real life locales was a nice touch as it added to the authenticity of the history as well as what was being taught. There was certainly so much information jam-packed in less than an hour of run time. Prof. Kamene has a way of talking about these aspects of history in a calm way, yet still having a noticeable amount of enthusiasm about the subjects. He doesn’t talk down to the audience while at the same time doesn’t use a ton of fancy words to show how smart he is. Given his background teaching at the elementary level in the New York school system, I can definitely see how he’s able to break it down that almost anyone can understand what’s being said. The cameras were very crisp in capturing the interview footage, the B-roll of New York and Boston, and even the green screen interviews with the changing pictures and archived videos were handled quite well. Neset handling most of the production single-handedly with the filming and music was impressive. The music was a mix of jazz and lighter trap beats that weren’t distracting from the message and content. While there was the objective historical aspects and Malcolm’s philosophy brought up, there were things that would shatter people’s misconceptions about him being a bigoted figure (Saying nothing about how Black people don’t have any sociopolitical power or privilege in America to be racist to other groups is a whole other story, let’s keep it real). One example involved Prof. Kamene talking about Malcolm’s return to debating in England at the London School of Economics. Despite only ten minutes of that debate being found on the internet, he was able to “win the hearts” of a majority white audience when he debated against extremism even though he supposedly “lost” that debate according to the higher ups at the school. There were also moments about how Malcolm X doubted himself or becoming sick from being over-exerted from traveling which was an interesting touch to show how human he was because a documentary like this could’ve come off as a hagiography of sorts in the wrong hands.

The X Factor does have a few problems. While most of the film looked just fine or even great, there were some production aspects that were glaring to me. The long fixed shot takes of the interview got a bit much. The minimalism approach worked more often than not, but I felt like there was a limited amount of angles with semi-close up interviews, B-roll footage, and two green screen interviews that were separated by a simple dissolve as Prof. Kamene switches outfits. There was a lack of white balance in a sunny scene while in New York which was far too bright. One major titling issue came up with a glaring continuity error was how Neset is first mentioned in the opening titles as Heru “Neset” Coleman and didn’t become Heru “Neset” Kamene until the ending credits. I understand that Coleman is the birth surname of both Neset and Kaba, but that was a rookie mistake in the credits. While Prof. Kamene has great narrations while dropping a mine full of pearls of wisdom, his delivery can come off as a lecture at multiple segments. I get that The X Factor does have an educational aspect, but it did border on sounding like a class especially during those longer fixed shots (the green screen ones were the most obvious to me). The biggest distractions from me came from some self-promotional scenes that came off as tacky despite the content. One scene has Prof. Kamene wearing a jacket which has the Movementism logo (their production company) alongside Neset’s name and during the final scene at Malcolm X’s grave site, he briefly mentions one of his books. I know the latter was more in passing, but I felt like it could’ve been said in one of the earlier locations instead of a cemetery. I do agree that this documentary isn’t a hagiography, but some of the narration did lean into that territory. Yes, Malcolm X is a very influential person and its shameful how mass murderers and rapists have been treated better than him even to this day, but some of the compliments can come off as going way too overboard as well as distracting from the historical facts presented even with all the positive things he did for the Black community.

This historical documentary was quite fascinating in detailing locations and the history of Malcolm X. I liked how much information was brought up on display through the narration and interviews. It really showed so much nuance with the good things he did in multiple countries until he was unfortunately murdered. There were even aspects that needed to be mentioned like his debating skills or how both major American political parties have severe issues on race (the Southern Strategy was even implied which was a very potent touch). However, there were times that the narration came off too much like a lecture and some production gaffes did hinder The X Factor a bit. I would still recommend this to anyone interested in Black History or even historical documentaries in general. I know History Channel isn’t going to go that in-depth or make fake mainstream biases for example.

Cons:
-Some production errors and the lack of variety of camera shots
-Self-promotion aspects got distracting and incongruous
-The narration can be didactic

Content Warning: The X Factor really doesn’t have a lot of offensive material, but it’s not a light watch. Because the topic involves Malcolm X, expect discussions on his assassination, the more overtly racist time periods during his lifetime, and some uncomfortable truths about American history. There’s no swearing, sex, innuendo, or onscreen violence. Anything that is violent is only mentioned or implied.