Ghost in the Shell: The New Movie Review 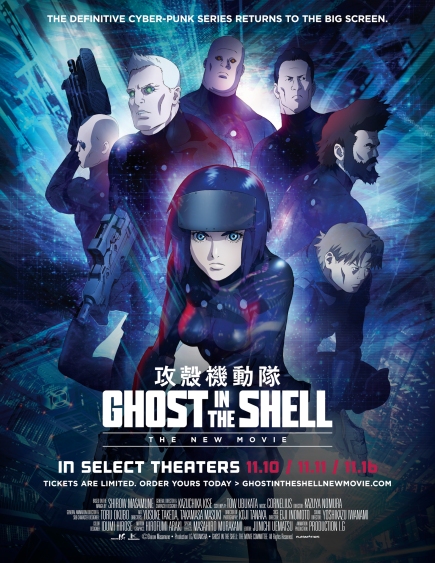 -The New Movie is the official finale of the Arise prequel storyline. It’s important to watch all 5 Arise films prior to watching this sequel. Spoilers will be mentioned here.

Fun Facts:
-The New Movie is the 3rd GITS film and the first animated feature since Solid State Society which came out 9 years prior to this film.

-Batou is played in the English dub by veteran voice actor Christopher Sabat. Even if you’re not an anime fan, you’ve probably heard his work on multiple projects. He’s voiced Kuwabara from Yu Yu Hakusho, All Might from My Hero Academia, and Alex Louis Armstrong from Full Metal Alchemist, but everybody should know him as the voice of Vegeta in Dragon Ball Z. One could say his ubiquity level in voice acting is OVER 9000!

-Kazuya Nomura directed this film. He’s also directed Joker Game, Run With the Wind, and Robotics;Notes. Outside of that, he helped animate Texhnolyze, Flip Flappers, and Read or Die: The TV as well as doing storyboard work for Haikyu!! To the Top and Xam’d: Lost Memories.

-The new character Chris is voiced in the Japanese version by Megumi Han. She’s the current VA of Gon in Hunter X Hunter (side note: I would’ve now reviewed all three seiyuu who have played that character after this review), Momiji in the Fruits basket remake, and Jackie from BNA.

-Hilarious in Hindsight: Saito says “I feel like somebody’s watching me.” Congrats! You officially have Rockwell’s song stuck in your head now! Also, Togusa says “I should’ve stayed home today.” Dude, I know you’re not a cyborg, but were you ghost dubbed by Arnold from The Magic School Bus?

Consider this an unexpected achievement of sorts even though I didn’t make this an official goal. After three years, I reviewed the entirety of the Arise prequels. Sorry for the wait, but I finally got this finished. Ghost in the Shell is certainly one of the most esteemed sci-fi properties anime or otherwise. So many other anime have been influenced by Shirow’s work and as I’ve mentioned in one of my previous Arise reviews, The Matrix wouldn’t exist without the original movie. I wanted to delve more into this prequel series and I finally reached the conclusion for this storyline. Not that I’m going to dock the movie for this, but it has such a generic title. The New Movie? Really? Couldn’t they have come up with a better title? Okay, enough nitpicking.

Let’s go back to Newport City, Japan. It’s so weird watching the Arise series when we’re in the same decade. I also wonder how people in Rhode Island or Wales feel about the name of this fictional city…

Ghost in the Shell: The New Movie takes place in 2028 and it’s right after the events of Pyrophoric Cult. Major Motoko Kusanagi is being congratulated by the prime minister of Japan for Section 9’s work. At the same time, Lt. Kurtz has been brokering deals while also planning on using Fire-Starter in her own nefarious ways. Unfortunately, the prime minister gets assassinated by touching a bomb loaded in a briefcase. He and others in the hotel room die on impact and Section 9 is forced to investigate the murder. There is a string of murders going on that are tied to various soldiers who held businesspeople hostage, but some people had their cyberbrains hacked to attack others. There’s also some kind of clone around who looks just like Motoko who’s been attacking so many people out there. It’s a connection going on with war profiteers as well as other businesses like another East Asian conglomerate that was in talks with Kurtz. Is she still around despite her body being blown up in the blast (she was in the same room as the PM and tried to stop him)? How will Section 9 deal with this dire political situation?

I will say that The New Movie definitely improves in the production department compared to the Arise OVAs. I won’t call it Production I. G.’s best work as a studio, but at least I can tell it’s movie quality and it’s far more consistent than the Arise prequels. The fight scenes and Net scenes are all engaging as well as wonderfully animated. It was also good seeing the characters be quite dynamic in this world. One fascinating exchange was with Motoko meeting the PM’s son Osamu Fujimoto where she smiles. He calls her out by calling her smile calculated, but she replies by claiming she never has a “programmed” smile towards anyone. That’s certainly saying something because she rarely ever smiles in this series. Logikoma was also a riot and I can tell that Jad Saxton certainly had a lot of fun playing these robot characters. Her asking about Batou ever dying before made me laugh. I thought the stakes were already high with the Pyromaniac incident, but the fact the PM was assassinated gives several new layers of tension to the plot. It’s a state of emergency (rightfully so), Section 9 gets temporarily disbanded, investigations are opened then closed then opened again, and the whole Motoko clone (Motoklone?) situation gets even more dangerous. This could’ve been predictable like a subplot involving the Major getting framed, but it surprisingly doesn’t go there. Not getting into spoilers about the clone situation, but the identity behind the clone gets quite hilarious in hindsight when you consider who’s behind all of this in the dub. If you anything about the Arise dub cast, this will become obvious to you. Like most other installments in Ghost in the Shell, there are certainly political and social elements at play. There’s the more overt aspect with geopolitics and war profiteers going on, but there are talks about corporations privatizing everything or how rampant commercialization could lead to protests which becomes frighteningly accurate in 2020, especially what’s going on with America and I’ll leave it at that. Talk about real-life being affected by the plot. The dub voice acting was certainly great and I can watch anything affiliated with Arise in both languages.

The New Movie could be upgraded in different ways. The 2nd half of the movie does drag on despite some nifty fight scenes. There were a few parts that bored me which is a shame because a lot of the plot is good showing more of Motoko’s backstory and some good worldbuilding. They also go to the GITS Easter egg well with some of the scenery, concepts, and the last scene before the credits roll involves Motoko jumping off a building before turning invisible. I get it! I’ve seen the original movie, and they already did this in one of the earlier Arise OVAs. That would be like if they made another Indiana Jones movie and there’s a scene involving a giant boulder rolling down towards Indy and whatever protagonist is with him. That would be homage overkill, and everyone knows it. While the plot twist with Kurtz being blown up did legitimately surprise me, how she would play into the plot because predictable for me with the childhood backstory scenes with her and Motoko or the status of Fire-Starter. There was this talk about the 3rd world which was weird. The characters don’t know what that term could mean. They’ve never heard of that term originally being used as a dog whistle term for so-called poor and underdeveloped countries? Wow, I guess there are stupid people in 2028. I know the term is used for a world with no more data, but that was just odd naming. I know I made a joke about The Office in the Pyrophoric Cult review with one of the deceased being named Michael Scott, the generic names continue. One of the antagonists is named Robert Lee. It became uncomfortable when he and his employees made comments about slave trading. Hey, Robert…if you have a middle name, does it start with the letter E, by any chance? I know he’s a bad guy, but I just shook my head. Speaking of racism and unfortunate implications, check out this screenshot from the opening credits. 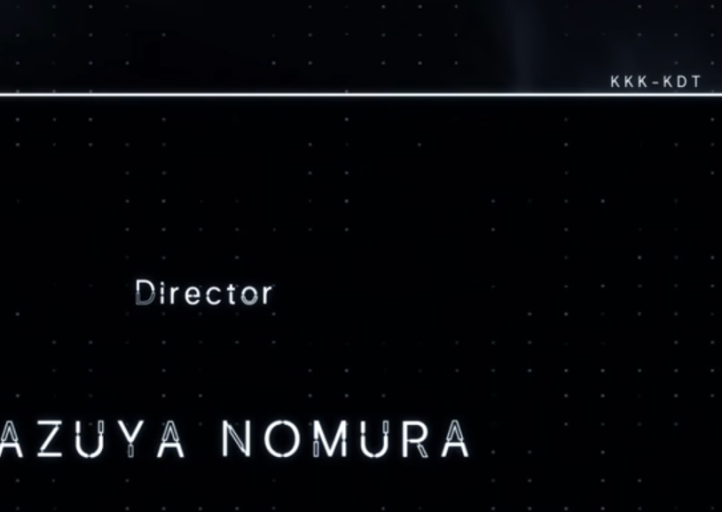 You could’ve randomized the letters in different ways, and no one saw this on the cutting room floor? I haven’t felt this awkward and offended by naming choices since I saw Hunter X Hunter: G. I. Final where Gon and Killua find the password to find the former’s long-lost dad Ging. Keep in mind this happened in 2015, so there is no excuse why they couldn’t change it. This may seem shallow to some viewers, but I’m docking points because of what I caught in the movie. Funimation should also know better and could’ve edited it as well. I don’t want to stereotype that company by being based in Texas, but way to rail against stereotypes of the South (sarcasm fully intended).

Ghost in the Shell: The New Movie was a return to form of sorts, but I felt that it could’ve been better. The action and animation are certainly highlights in this film. It was great seeing some top-notch characterization even if a lot of it was subtle. There were some predictable parts and some rehashing of older elements though. I wanted to give it a higher rating like a 7 or 8, but that brief few seconds of the credits really ruined it for me since I know the creators know better. I would expect this from a teenager or college-aged jerk being a racist troll. Not a professional animation studio with employees clearly old enough not to do this crap. Come on, I don’t need these douche chills by watching something Ghost in the Shell-related, especially in this current racial climate.

Cons:
-Parts get predictable with Kurtz
-Some scenes can get boring
-The fact I saw the letters “KKK” grouped together in passing in a GITS movie makes me want to flip my desk.

Content Advisory: Definitely for mature audiences only. The New Movie actually gets gorier than most GITS media I’ve seen not just with the body count or bloody fight scenes, but there are severed limbs, Motoko gets shot up, one character literally takes his face off to reveal his robotic skull, and you see the Prime Minister’s charred up body up close at the morgue. The violence gets intense with shootings, stabbings, dismemberment, and Motoko even bashes the PM’s corpse to reveal a remote control in his cyborg body. There’s some swearing and some fanservice going on, too.