It has been quite a while since I made any Top 7 lists involving documentaries. Sure, I mentioned a few in some of my previous entries this year, but I want to do my best to mix it up with the types of films I cover on Iridium Eye. As some of you may know, I enjoy works that challenge things like genre conventions, storytelling, or other tropes. It certainly becomes obvious to me when it comes to fictional works, but when it’s a documentary it can become just as much if not more eye-opening than a narrative film or TV series. I wanted to balance a mix between conceptions from the average viewer as well as some of my own hidden thoughts on certain matters.

Stereotype: Christian musicians (or musicians who are Christians) just copy what’s popular and have no artistic merit.

Some of you who have followed this blog in the beginning might remember me reviewing this film. Danielson: A Family Movie was one of my first music documentaries I reviewed. I understand that the Christian music scene has been criticized for copying whatever is in the mainstream assuming if they’re not 5-10 years behind the times, bad lyrics, and is overly safe from a creative standpoint and I would agree with those critiques. You can’t say the same about this New Jersey band lead by singer/guitarist Daniel Smith. They have one of the quirkiest sounds I’ve ever heard and nobody sounded like them when they were starting out back in the 90s. If anything, you have freak folk and experimental indie bands who kind of sound like THEM especially over the past decade or so in underground music. They have witty lyrics, unique song structures, and some clever symbolism such as the nurse uniforms or Daniel’s 9 foot tree costume used in some solo shows. To be fair, Danielson isn’t a band for everyone and I could see their music being too weird for a good portion of people.

Oh and by the way, Danielson is one of the main reasons why Sufjan Stevens has a career! He was a touring drummer in the early 00s and members of the band have produced or been sidemen/women for some of his albums. I’m just saying, people.

Stereotype: Pro wrestlers are stupid steroid freak meatheads and there’s no wrestling scene outside of America, Mexico, or Japan.

I can’t lie to anyone, despite some of my nitpicks of this short documentary, this got me into the BritWres scene quite unexpectedly. If you would’ve told me 3 or more years ago that I would watch UK indie wrestling from different federations, I would’ve called you insane. Eddie Dennis really shocked me not just with his in-ring prowess, but with how intelligent he was. He has a bachelor’s degree in math as well as being a head teacher before wrestling full-time which is a huge career transition (okay, he did wrestle on the weekends while working at a boarding school, but still). I didn’t even know a country like Wales would produce such talented wrestlers and it seems like that country has been getting some exposure not just with Dennis signing with WWE’s NXT UK program, but that same company would sign his fellow Cymru compatriots with Mark Andrews (both of them were the first tag champs in Progress with FSU), Flash Morgan Webster, Tegan Nox, and “Wild Boar” Mike Hitchman. Dennis’s story was very inspiring and I hope he’s doing well despite the COVID situation not allowing wrestling to go on in the UK besides his social distance match with Chuck Mambo.

At the time I wrote that review a couple of years ago, I wasn’t aware of the fact that there was a BBC Wales documentary about him and he participated in a Pokemon cosplay tag team match in Attack! Pro Wrestling where he was Charizard alongside Andrews as Pikachu against Hitchman as Koffing and English wrestler Pete Dunne (as seen above) as a Team Rocket member. Wrestlers are such nerds.

5: Make It Happen: Masters of Invention

Despite being an aged documentary that clearly came from the 90s, Make It Happen still has lots of useful information. I learned more about these Black inventors in less than half an hour of watching this than all my years of being in school. These examples weren’t just some small-time people, you have multiple examples such as Elijah McCoy, George Washington Carver, Dr. Patricia Bath, and these two examples above with Granville Tailer Woods and Lewis Howard Latimer respectively. Those two got ripped off by Thomas Edison for their respective inventions with train telecommunications and the light bulb respectively among other inventions. Nikola Tesla, you weren’t the only one who had their work stolen by Tommy. Just saying. There were so many examples as well as various inventions we take for granted everyday, but so many of these people aren’t in the history books which is a huge shame. I almost ranked this higher had it not have been for the Madame CJ Walker mention (She’d be NOTHING without Annie Malone!), but I know the heart is in the right place. It would be awesome if this documentary were played in schools, so people can really learn about these forgotten inventors. There are so many innovators that unfortunately get looked over because of the color of their skin and I wished that wasn’t the case in this current reality.

Stereotype: Companies can never sabotage works of indie creators especially not in America.

Part of me feels stupid for not mentioning the Bananas!* documentary series on my previous Top 7 list, so I’m making it up by putting the sequel on this post. The original doc was eye-opening, but the sequel gets insane as it covers how this Swedish director exposed the uncomfortable truths about the Dole corporation much less what’s going on in big agriculture/produce. The aftermath of the premiere involved filming Big Boys Gone Bananas!* where a tiny film studio is being smeared despite telling the truth about the abuse of the Nicaraguan banana workers or the pesticides being used. You see everything from the astroturfing on social media, cease & desist lawsuits, and ad campaigns which paint Dole as the innocent banana company while the filmmakers are big bad meanie pants who want to hurt their profits. Geez, victim playing, much? Trust me, you’ll want to root for these documentary workers while watching this or the previous film. This wasn’t censored by Iran (ask Jafar Panahi about that!), Turkmenistan, or North Korea, this was done by an American company which shocked Fredrik Gertten so much in one of his interviews in this film. This was such a huge battle of free speech and international laws which get quite mind-blowing.

3: March of the Gods 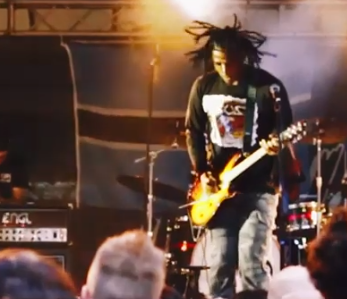 You think places like America, Scandinavia, or even Mongolia gets to have all the fun with heavy metal music? Welcome to Botswana! Africa’s most metal country ever! While most of the documentary focuses on Gaborone’s famous death metal band Wrust, they cover so many metal bands in that country as well as several fans who have their own unique take on the scene with spiked-up jet black cowboy attire (I can’t make this up). March of the Gods does a great job documenting that Southern African nation’s scene, subculture, and history of how this music exploded in popularity. I could also see this being a gateway not just with Botswana’s metal music scene, but with the continent’s scene at large. You have other bands such as Irony Destroyed from Kenya, Before Crush from Angola, or one of my current favorite bands in the genre Arka’n from Togo (You might remember them from my first ever Top 7 list of musicians who should score films). Who knows? Maybe Botswana or other countries could have their own Wacken where their locals and international talent can play for so many people.

2: Tie between Beatrice and Francesco

Stereotype: People with physical disabilities can’t fence or swim (what an ableist statement).

We have an Iridium Eye Top 7 list first, everyone! This is the first time I have a tie for this kind of post. All self-congratulating aside, I had to put both examples on such a list as this. Both involve short docs directed by Venezuelan documentary filmmaker Lorena Alvarado as well as Italian parasports athletes for fencing and swimming respectively. My first exposure to Alvarado’s work was Beatrice which was immensely inspiring on so many levels and I didn’t even know that fencing was in the Paralympics. Her story was one of tragedy, but Beatrice Vio was able to survive multiple amputations due to severe meningitis to become a decorated fencer as well as being the only one in her sport who has no hands (both were amputated and she puts her sword on her elbow even though she does use prosthetics outside of that sport).

Francesco involved a different sport, but it was no less inspiring. This swimmer has muscular dystrophy and has visibly disproportionate limbs, but he is able to swim as well as someone without those physical limitations. I was certainly impressed and I was also unaware that anyone in that condition could actually swim, so that was another eye-opening experience. It was also fascinating seeing him do other tasks such as building and fixing things. Not going to lie, I am not that good at some of the mechanical things he does and maybe Francesco can help me out if I’m in Italy and something happens with a bike or car. All joking aside, I would strongly recommend these two talented athletes and their respective documentaries. I guarantee you’ll be inspired.

Stereotype: Ethiopia (much less Africa) is nothing but some poverty-stricken war zone that no one should visit.

With a title like that, you just know this documentary is going to intentionally destroy some preconceptions about Africa. Yes, I know Ethiopia has some of their own issues, but they never show you this side of the country let alone the continent. It was amazing seeing the natural beauty, epic tourist spots, some luxurious areas, and some great historical elements that were so fascinating. This documentary was a great showcase into one of the oldest countries on the planet that could rival so many travel documentaries out there. My mind exploded when I saw the picture of the Tower of Axum, the fancy hotel that Phil stays in the Northern part of the country, and even the brief Ashenda Festival scenes where both Ethiopians and Eritreans could celebrate together after the peace deal was signed between both countries the year it was filmed. This was a HUGE deal between Ethiopia and Eritrea especially since they couldn’t visit each other’s countries since the 90s and both leaders did it on their own accord.

So that’s my list. Can you name other documentaries that challenge various stereotypes both little and big?

The breaking class picture is from Wallpaperflare.

The picture of Daniel Smith from Danielson: A Family Movie is from Tiny Mix Tapes and is property of Home Video Entertainment and Image.

The screenshot of Eddie Dennis wrestling Pete Dunne is from YouTube and is property of Beyond Gorilla.

The screenshot from Make It Happen: Masters of Invention is from YouTube and is property of LightStream Media.

The picture of Big Boys Gone Bananas!* is from Pinterest and is property of Virgil Films.

The screenshot of Wrust from March of the Gods is from YouTube and is property of Raffaele Mosca.

The screenshot of Beatrice Vio is from Vimeo and is property of Lorena Alvarado.

The screenshot of Phillip Scott and the Ashenda dancers is from YouTube and is property of African Diaspora News Channel.