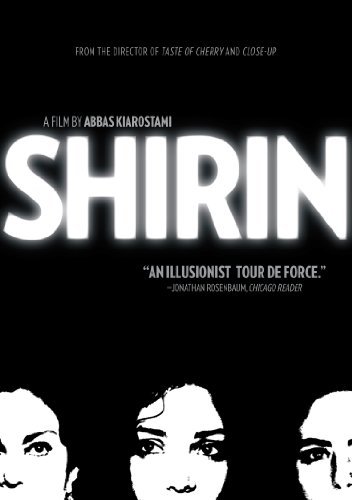 -There were over a hundred actresses and a few background actors in Shirin and there were only a few repeat shots of their facial expressions.

-The moviegoers in Shirin weren’t actually watching a real movie let alone sat in a movie theater. This was all filmed inside Abbas Kiarostami’s house with a few actresses together at a time. They all looked at dots above the camera and improvised their facial expressions. What about the dialogue and soundtrack, you ask? These were just audio narrations and music custom-made for this movie added in post-production. The kicker is that none of the “cast” of Shirin knew the project was about that centuries-old Persian poem until long after the filming ended.

-The only non-Iranian who participated in this film was French actress Juliette Binoche. Some of you who know about international film might recognize her as Julie from the Three Colors (Blue, White, and Red) trilogy by legendary Polish director Krzysztof Kieslowski. She was also in the 2014 American Godzilla remake, the live action Ghost in the Shell remake, and she would collaborate with Kiarostami again with Certified Copy just two years after Shirin was filmed.

-One of the several actresses in the audience was Sara Khoeniha. She debuted in the Iranian movie Bloody Morning and would eventually play a bit role in Mission: Impossible 6 a decade after Shirin was released.

-Hilarious in Hindsight: Hey, Shirin certainly has a TON of close-up shots for a Kiarostami work! Get it? It’s because he directed the movie Close-Up! Okay, I’ll applaud anyone who got the joke before explaining the punchline.

We’re back at Iridium Eye when it comes to reviewing more of the filmography of the late Abbas Kiarostami. I believe I underestimated how influential of an auteur he is despite not learning about him in my film studies classes. Martin Scorsese is a fan of his work, he’s won various awards, and he even has his own Wikipedia page that’s solely about his cinematic style. To really put this in perspective, the only other director who has their own page of that same topic on that site is Christopher Nolan. Yeah, think about that for a minute. This certainly blew my mind with how much there is to learn about this Iranian film director. After being exposed to Taste of Cherry, I underestimated how unconventional he is as a filmmaker even to the point of deconstructing or straight up defying tropes and cinematic styles associated with the Hollywood standard in ways I would’ve never have seen before even with other experimental or art house works I’ve covered on here.

Shirin takes place in a movie theater. Over a hundred people are invited to see the premiere of this adaptation of Khosrow and Shirin. Using only the faces of those in the crowd, this film displays the emotional reactions to the majority female audience. The film they watch is a tragic love story where the Armenian princess falls in love with this Persian king. They are star-crossed lovers (this story predates Romeo & Juliet by centuries. Take that, Shakespeare!) , but she is reluctant. Shirin won’t marry the king unless he reclaims his throne from a usurper. Both of them end up in different countries and other family members have fatal entanglements in their romance. How will the audience react to this adaptation?

Real talk, this might be the most challenging film I have ever reviewed to date. This project makes Taste of Cherry or even Close-Up look straightforward by comparison. I am no stranger to experimental and art house films including the ones I’ve reviewed, but even I felt like uncultured swine in that kind of cinema. The concept and presentation of Shirin was so foreign. One doesn’t see what the actresses are seeing, but only their facial expressions to what’s going on. Before you call Shirin an avant-garde reaction video like if the Fine Brothers decided to have class, this is far different because there’s no visuals behind or during the reactions. Things are left to the interpretation for the viewer full stop. Despite not knowing about this classic Persian story, I could at least get the gist of what was going on with the voice acting as well as the sound effects. I will say the soundtrack was beautiful with the lush symphonic touches while using some Middle-Eastern melodies in an orchestral context. The acting was exceptional and I’m referring to both the voice acting and the moviegoers. The narrations worked quite well and had the right emotional impact. Seeing the facial expressions of the women reacting to the scenes was top-level work. You could see some acting neutral, smiling, crying, or shocked depending on the scene of viewer. The fact that the whole movie was based on a film that didn’t exist and the viewers not going in knowing anything about Kiarostami’s plan makes this greater in hindsight. I legitimately believed they were watching a movie in a small movie theater this entire time instead of looking at dots or being in a room filled with silence. There was a nice metaphorical touch with the women being the focus as it ties into a woman’s perspective in watching something that involves female characters making sacrifices especially in a country with very questionable track record with female rights (understatement of the decade). What I also noticed were some men in the background in some of the scenes. I think this adds to the metaphor with how the patriarchy could always be present and watching even though nothing bad is happening. This was fridge brilliance with the very few male watchers being in the shadows while the spotlight and focus is on the women watching this non-existent movie involving an Armenian princess. The camera work is something that didn’t need to be something out of a James Cameron movie, but everything was crisp and well-defined with the lighting as well as capturing all the faces watching this story unfold (or rather, what looks like they’re watching a story). I will give Kiarostami credit for being very bold in crafting such an atypical movie even though the story isn’t hard to follow.

Shirin does have it’s own flaws which I do acknowledge. Remember how I talked about how experimental this movie is? The concept would certainly go over the heads of so many viewers and even I thought this was too experimental with the concept, so you know that’s saying something. I really had to get used to not seeing any visuals from the non-existent movie especially since the medium of film is very visual, so this deconstruction might have been too strong. Kiarostami has been outspoken about bucking Hollywood trends which I highly respect that of him, but I think he was overreaching in his attempts of filmmaking. Not going to lie, the filming style with the reaction shots is very repetitive. This isn’t repetitive when it comes to the actresses in front of the camera since they didn’t have that many duplicate shots per actress (having a large cast certainly helped), but it’s the same type of fixed close-up shot over and over which can be tiresome to get through even with the more exciting parts of the plot happening. Shirin is also a very intimidating film to say the least. I could see not just average viewers, but even film buffs being either bored, confused, and/or frustrated with the presentation of this film. I wouldn’t be surprised if people felt alienated despite the film’s intentions. If Shirin was the first Kiarostami film someone sees, they could potentially swear off his filmography which would be a shame. This is a movie better suited for experimental film fans, admirers of the Iranian movie scene (or at least Persian culture), or the most open-minded of viewers.

This ambitious avant-garde take on movie-making isn’t an easy watch due to the presentation, but I still thought it was a quality work. The observation on the female perspective with these reactions was quite fascinating. Learning more about the background made me appreciate the endeavors even more as this was like a well-staged docufiction instead of reactions to a real-life premiere. However, I thought the experimentation got overboard and even pretentious with the nonstop close-up shots of the moviegoers. If you want a movie that will challenge you in regards of how movies could or should be made, then be my guest. If you want something straightforward or at the very least want to see what they’re seeing then look elsewhere. Shirin is not some typical work even by Kiarostami standards.

Adjustable Point Scores:
-Add 1-2 points if you’re a hardcore Abbas Kiarostami fan.
-Add 1 point if you like Persian poetry or tales.
-Subtract 1-3 points if you’re not a fan of avant-garde or experimental films.
-Subtract 2-5 points if you want real reactions to what’s being shown or at the very least want your movies to be clearer in presentation.

Cons:
-Reaction filming is extremely repetitive
-Gets way too experimental and deconstructive in the context of cinema
–Shirin is an alienating movie to different kinds of viewers (not just casuals or the Hollywood crowd)

Content Advisory: Shirin doesn’t have too many offensive things. The swearing is extremely mild and would equate to a soft PG. There are characters who die, but nothing is shown. However, you do hear battle scenes with swords and some gore. There’s dialogue involving cheating and innuendos, but it’s rare. The most graphic things is a piece of ancient Persian art in the opening credits which shows a topless woman for a few seconds.